Odontonema strictum is native to Mexico and Central America. It grows very well in the garden and attracts birds and butterflies. It likes to grow in full sun, and once settled, it does not require a great deal of water. It grows easily from cuttings.  Updated 12/9/2018 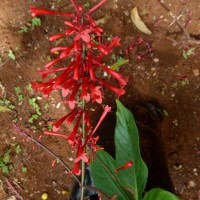 Ophiopogon, a native of tropical east, southeast and south Asia.  It was originally placed in the Liliaceae family, but since has been moved to the Asparagaceae family. It has a grass-like appearance but is not related to the true grasses. They are clump forming plants and grow from short rhizomes, bearing tufts of leaves, they are easy to grow, preferring light shade.  Updated 12/9/2018

Ophiopogon japonicus, the small variety grows to about 8” and this is more difficult, the other larger is easier, likes some direct sun.  Propagation is by division. 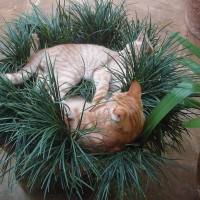 Ophiopogon juburan variegata is most attractive and thrives in the garden.  The plant grows in sun or shade, and is drought tolerant. 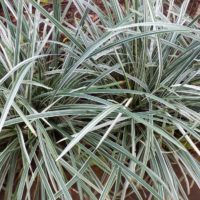 Optunia, native only to the Americas, imported to Europe during the 1500s and Australia in the 18th century, fast became an invasive weed, eventually covering over 1,500 square miles of farming land per year.  The Australian government tried many ways to contain this menace, mechanical removal and chemicals all failed.  The moth Cactoblastic cactorum from South America whose larvae eat the prickly pear was introduced in 1925, and was successful in combating the problem.   Up dated 12/9/2018

Opuntia microdasys
Opuntia microdasys, Latin “microdasys” meaning small and shaggy, may also become invasive in the garden.  This plant needs careful handling; instead it has no spines, instead yellow ‘glochids’ (mounds of prickles), finer than the human hair, that are lethal once they penetrate the skin.  Opuntia microdasys, is easy to grow, needing only poor well drained soil and full sun.

Orbea variegata, a native to the coastal belt of the western part of South Africa, has approximately 20 species.  It is a leafless succulent, which makes an attractive ground cover and can form large matted clumps.  The carrion-like smell from the beautiful flowers attracts flies for pollination.  The plant requires a rich gritty medium of well-drained soil with river sand added to grow successfully. In the wild, these succulents are shaded by growing under larger plants.  They root easily from stem cuttings.  Up dated 12/9/2018 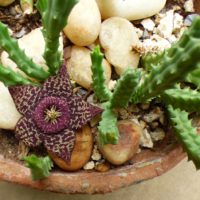 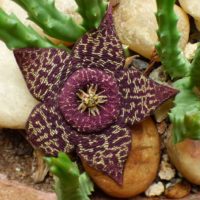