Jacquemontia pentanthos is native to the Florida Keys.  It grows  easily and is very aggressive, even smothering bougainvillea.  It is most attractive, but should be kept in check.  To flower well, it requires full sun, but is not fussy about soil. It is drought tolerant surviving on rainfall.  It cannot survive the sea breezes.  Interestingly, mealybugs who so love morning glory, don’t seem to have a taste for this plant. It is hard to believe but this is listed as endangered by the State of Florida.  Updated 15/9/2018 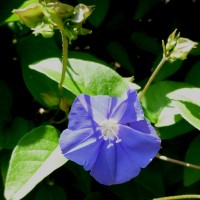 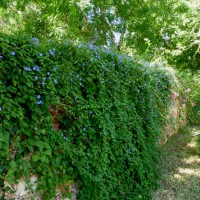 Jasminum floribundum grows wild in the bush around Bofa, but during the dry season, the plant disappears altogether.  It is drought tolerant and can be invasive in the garden.  The perfume from the flowers is incredible, but it only flowers in full sun.  Up dated 15/9/2018 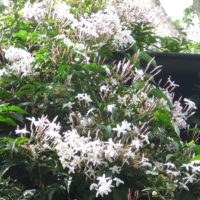 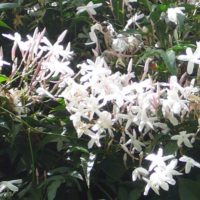 Jatropha is native to Cuba, West Indian islands and South America. It was first described by the Austrian botanist, Nikolaus Joseph Freiherr von Jacquin (1727–1817).  There are approximately 170 species – some are succulents, others shrubs and trees, and most are highly toxic.  Updated 15/9/2018

We have this growing in the garden but it should be removed as it is pretty useless as a ‘garden’ plant.  Hearing that the seed produces biodiesel for use in diesel engines excited me for a while but of course the whole garden and more would have to be turned over to growing this dull plant.  One remains as it has a vanilla orchid growing on it.

Jatropha integerrima is an evergreen shrub or small tree which flowers continuously with clusters of star shaped bright red or pink flowers which attract butterflies and sun birds.  It is happier in full sun or light shade and grows well in a container or planted directly in the ground.  It can be pruned at any time as it flowers on the current growth.  The berries are highly poisonous. 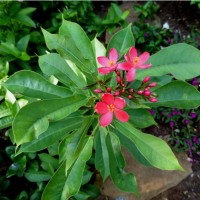 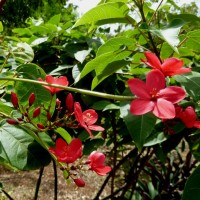 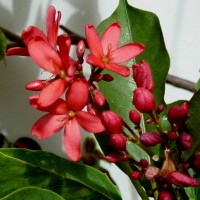 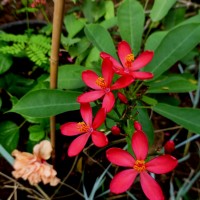 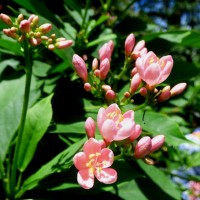 Jatropha multifida is a fast growing evergreen shrub, often growing close to the sea front in heavy coral where no other plants can survive.  It is an exceedingly drought tolerant plant that is not fussy about the soil, or where it is asked to grow, but it needs full sun, and then it will flower more or less continually.  It can become a nuisance in the garden.

In Africa it is known as “Moidine”, meaning the “tree of iodine” because of its antiseptic qualities and it is widely used as a cure for all sorts of small injuries. 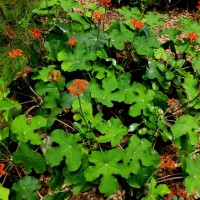 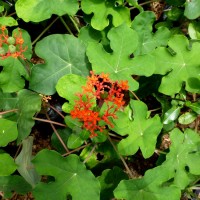 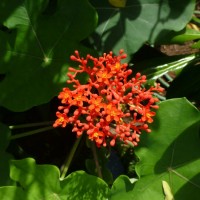 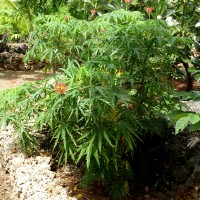