Lantana camara, it is native to Central and South America.  It was brought to Europe by Dutch explorers.  Lantana camara has colonised areas of Africa, Southern Europe, the Middle East, India, Sri Lanka tropical Asia, the Philippines, Australia, New Zealand, the USA, as well as many Atlantic, Pacific and Indian Ocean islands.    It is still increasing invading many islands on which it was not present in 1974.

It is a notorious weed, it outcompetes indigenous species, in several ways including a chemical that it excretes (allelopathy) which inhibits competing plants from grow.

Lantana camara invades agricultural areas and forms dense thickets; as it is toxic to livestock it becomes un-controllable.  The plant produces up to 12,000 fruits which are eaten by birds and other animals which spreads the seeds.  Because of its ability to form large thickets forest areas that are contaminated with Lantana camara are unable to regenerate.

Lantana camara is being studied for its medical value which seems promising.

Lantana camara attracts butterflies and birds and is used in butterfly gardens. Many butterfly species feed on its the nectar the largest butterfly in the western hemisphere Papioion homerus enjoys the nectar of the flowers.

There are domesticated ‘Lantant Camaras’ come in different colours including yellow, white and orange.
Up dated 13/9/2018

Lantana is native to tropical America.  It is a genus of about 150 species of flowering plants.  Lantana camara was brought to Europe by Dutch explorers and spread worldwide.  It is an invasive noxious plant that has chemicals, which it excretes, to reduce the growth of surrounding plants so that it can out-perform them.  It is toxic to humans and livestock, causing liver damage if it is ingested.

Lantana depressa is native to south Florida and is now an endangered species.  It is a  friend in the garden as it is a low growing, ground cover plant.  Keep it pruned, top dress with compost, and with a little water it will flower all the time. It thrives at the coast, in the ground but it requires protection from sea breezes.  Mealybug can be a problem. 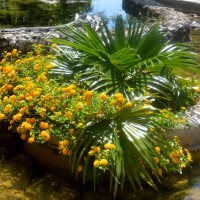 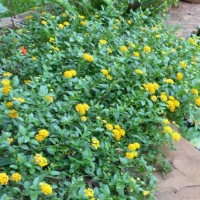 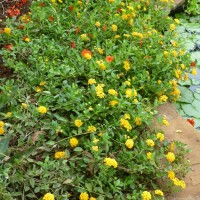 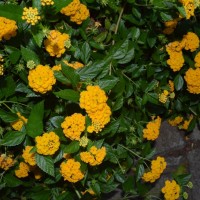 Lantana involucrata is native to the American tropics.  It is a low growing, fairly drought resistant, evergreen shrub that never stops flowering.  From time to time it can become straggly at which point a severe pruning followed by a top dressing of compost and a little water will help it.  Watch out for mealy bug. 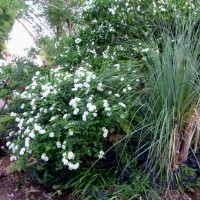 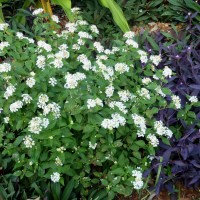 Lantana involucrata and Lantana montevidensis are low growing, fairly drought resistant plants.  They do not do as well in the garden as Lantana depressa.  If they are happy they flower profusely.  They like full sun and poor soil.  Prune if they become straggly. 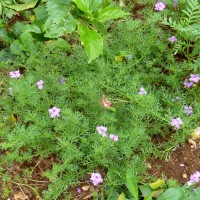 Ledebouria socialis is native to South Africa.  It is a small very green bulbous plant with mottled leaves. It grows in clusters and does not like to be over-watered.  It grows best in a pot, in rich, well drained succulent type soil. It likes to grow in bright dappled shade, with early morning or late evening direct sun.  The bulbs should be planted above soil level. 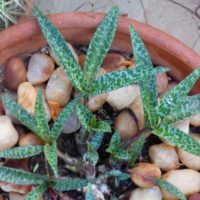 Leymus arenarius, Blue Dune Grass, is native to Central and Northern Europe and North America.  During the 17th century, under William III, the Scottish Parliament passed a law protecting Leymus arenarius.  Then in the 18th century in the reign of George I, the British Parliament expanded the law to protect the plants on English coasts,  declaring the cutting or possession of the grass to be a penal offense.  It is a stunning clump-forming perennial grass with blue leaves, that grows in full sun on the seaward side of the house. It is not fussy about the soil, but must not be over watered.  It is not affected by insect pests.  Up dated 13/9/2018 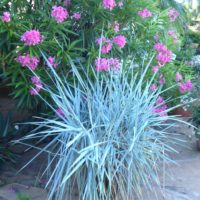 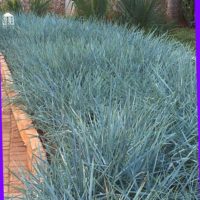