Kaempferia pulchra is native to Burma and is part of the ginger family.  It is grown for the attractive decorative foliage and the dainty lavender flowers.

We tried Kaempferia pulchra in the open ground where they grew well until the dry season when they went dormant.  The plants were forgotten and the little tubers were accidentally dug up and thrown out.  Pots are the answer.  For a plant that looks so delicate, it is amazingly tough and not at all fussy about soil, seldom receiving extra food.  It still wakes up and gives of its best when watered, going back to sleep when it becomes too dry.  It hates the sun.  Updated 15/9/2018 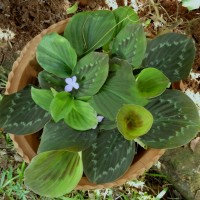 Kalanchoe, a genus of about 125 species, originates in different parts of the world, Madagascar has 60 species.  It was first described by the botanist Georg Joseph Kamel.  Michel Adanson gave the generic name Kalanchoe from the Chinese name ‘Kalanchauhuy’

Kalanchoe are succulents.  Many grow well in the garden and some can be used as ground cover, whilst others may become invasive.  They require minimal care, tolerate dry conditions, high temperatures and most tolerate full sun. Most of the sap sucking insects find other plants in the garden tastier and leave the Kalanchoes alone.
Up dated 15/9/2018

Kalanchoe blossfeldiana is an all year plant .  Part of the year the foliage works well as a ground cover,  then after the rain, they flower, with bright red clusters of long lasting blooms.  It withstands drought fairly well, but can look rather forlorn if it is too dry. 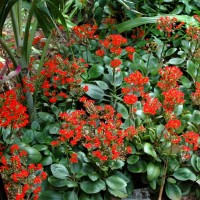 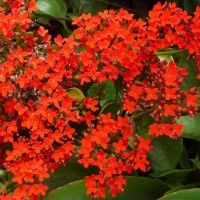 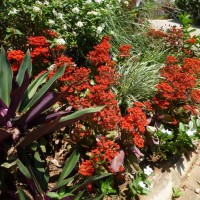 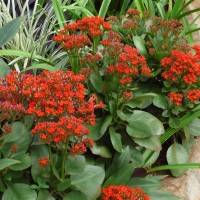 Kalanchoe daigremontiana, is also known as Bryophyllum daigremontianum, or mother of thousands.  Is a succulent  native to Madagascar that can survive prolonged periods of drought.  Plantlets grow on the edges of the leaves, fall off and  root wherever they land, so this plant can become invasive. 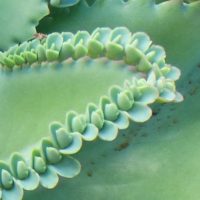 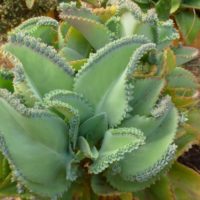 Kalanchoe laciniata is found in tropical east Africa. It is as easy to grow, like a little more protection from the mid-day sun than most Kalanchoes. The leaves are used for folk medicine in India. Cuttings root easily. 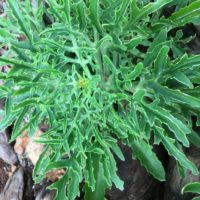 Kalanchoe marmorata, native to Central and West Africa.  It was first described by John Gilbert Baker in 1892.  The growing medium should be gritty, grown in bright sun, avoiding the mid-day sun. 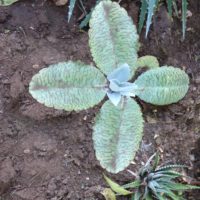 Kalonchoe orgyalis, native of Madagascar.  It is a slow growing shrub which can eventually reach 6 feet. It is quite different looking with copper-coloured spoon shaped leaves. It is drought tolerant and should be planted in well-drained soil. 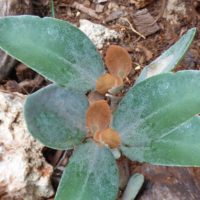 Kalanchoe pumila is found in the mountains of Madagascar.  It is a low growing succulent with a spreading habit and makes a good ground cover. It tolerates poor soil, and needs no extra water. Leaf cuttings grow easily. 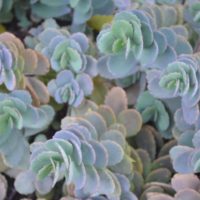 Kalanchoe thyrsiflora is an unusual succulent, growing with round paddle shaped green leaves which get a red tinge to the edge of the leaf if exposed to a lot of sun.  This plant is easy to grow, given a little water when necessary. 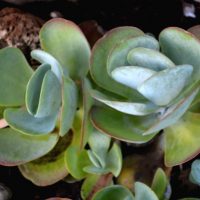 Kalanchoe tubiflora is native to Madagascar and, when grown well, can be most attractive.  It is drought tolerant and grows where few other plants will survive.  It is toxic to animals and it can be an invasive weed, so care must be taken to keep it under control. 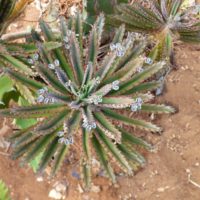 Kigelia Africana, better known as the Sausage Tree, is native to Tropical West Africa and is now found throughout tropical Africa.  It is a single species in the Bignoniaceae family.  It was first described by the botanist Michel Adanson in 1763.

It is an evergreen tree, giving much needed shade and a place for orchids to grow and flourish.  The large dark red, waxy, bell-like flowers are produced on long panicles hanging from a branch. The blooms open for one night, emitting a strong smell that attracts bats for pollination.  The tree in the garden produced two sausages and nothing since.  The fruit is eaten by baboons, bush pigs, elephants giraffes, hippopotamuses and porcupines.  The fresh sausage is poisonous to humans, in central Kenya the dried sausage is made into an alcoholic drink called Muratina.  Scientific studies in recent years suggest that Kigelia Africana may have remarkable healing and conditioning effects on the skin.  Updated 16/9/2018 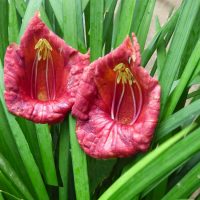